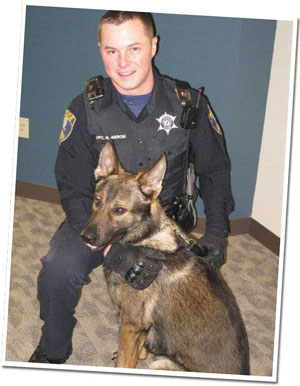 The Canine Unit is comprised of Officer Nic Anson and K-9 Aries.

Aries, a German shepherd born in Germany, is now going on his fifth year at the St. Charles Police Department and starting his third year as a member of the Kane County SWAT Team.

In 2012, Aries assisted the St. Charles community in performing several school searches in School District 303, along with surrounding communities. In October of 2012, Aries was called on to assist another agency with a narcotic search of a vehicle. Aries alerted to the odor of a narcotic in the vehicle. After further investigation by the agency they were able to locate over 200 plants of marijuana growing in the suspect’s home.

Every year, Aries is required to be recertified by the State of Illinois. This year, the K-9 Unit updated their recertification standards during a week-long training session with the Illinois State Police. During this time, the K-9 Unit was tested in the following categories:

The K-9 Unit received passing marks in all categories and has been successfully  recertified as a dual purpose K-9 unit through the Illinois State Police.