St. Charles was named the winning community in the 25,000 to 50,000 population category from America in Bloom National Awards program. Judges also gave St. Charles the Outstanding 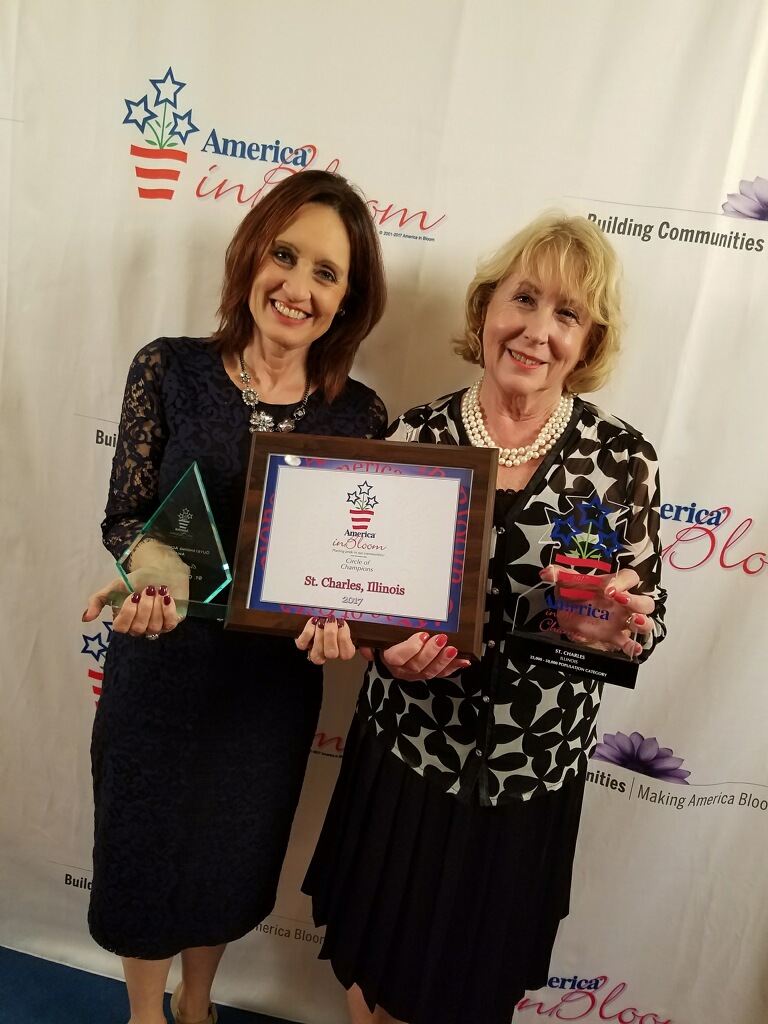 Achievement Award for Overall Impression, among the 40 communities that entered from across the nation. The awards were handed out at the organization’s annual symposium Oct. 7.

The award was presented at the Oct. 16 City Council meeting.

This is the third year St. Charles has entered the competition. This year’s wins earned St. Charles a spot in the Circle of Champions, which include communities that have earned a combination of any three awards in the population category or for outstanding achievements.

St. Charles scored 904.50 out of a possible 1,000 points, earning the coveted ‘5 Blooms’ rating. St. Charles Landscaped Areas also received a nod from the judges, having scored in the top three for the Outstanding Achievement Award in that category.

“While we are thrilled for the recognition that St. Charles is a wonderful place,” said Ward 5 Alderman Maureen Lewis. “It’s about more than merely winning a competition. Every one of the volunteers involved all year long on the America in Bloom entry works to make St. Charles the best community it can be.”

An Excerpt from the judges’ report:

“Whether one is a resident, just ‘passing through’ or arriving at their vacation destination, St. Charles exudes a warm and open atmosphere. This warmth embraces everyone and is just one catalyst encouraging community participation.”

To top things off for the St. Charles in Bloom Committee, committee member Pam Otto from the St. Charles Park District was named the recipient of the 2017 America in Bloom Community Champion Award. This award is presented to the AIB volunteer who "has demonstrated an outstanding vision and selfless commitment to moving the community forward."

There are many ways to volunteer to be a part of St. Charles in Bloom. You don’t need a green thumb! Contact Diane Cullen at dianelcullen@gmail.com or Maureen Lewis at mlewis@stcharlesil.gov.

For more information about America in Bloom, visit www.americainbloom.org.

Some members of the 2017 St. Charles in Bloom Committee with their well-deserved awards!

Friendly neighborhoods, diverse retailers, international employers, innovative schools, beautiful parks, varied cultural amenities, and unique architecture have earned St. Charles its reputation as the Pride of the Fox. Located in both DuPage and Kane counties, the City of St. Charles is 35 miles west of downtown Chicago, and has a population of approximately 33,000. Over 1,800 businesses, consisting of a balanced mix of retailers, restaurants and manufacturing facilities, employ more than 18,000 people. The City of St. Charles was named the #1 City for Families by Family Circle® magazine in 2011; one of the “150 Great Places in Illinois,” by the AIA Illinois; and one of the “Top 10 Towns To Live In” by West Suburban Living magazine. www.stcharlesil.gov

America in Bloom - St. Charles: Planting Pride in Our Community