Historic Landmark of the Month

Landmark of the month was originally created in honor of the 185th Anniversary of St. Charles. However, after covering the last landmark of the year, we realized there are many more wonderful local landmarks to highlight in town. So, we have decided to bring Historic Landmark of the Month with us into the New Year!

January’s Landmark of the Month is the Evison, Ferson, Satterlee House. The house was originally constructed as a barn on the property of Thomas Clark, whose initials are carved into the clapboard. It was later owned by Tom Evison, a farmer and Civil War veteran, in 1852. In 1885, the barn was purchased by the railroad and moved to the tracks near the stockyards. At the new location, the barn functioned as a grain elevator and feed store. George Ferson, the son of one of the founding families of St. Charles, operated the store. Following George’s death in 1900, his daughter, Emma Satterlee, moved the barn structure to its present location at 214 Chestnut Ave and converted the building into a house.

In 2009, the current owners undertook a restoration project to restore the exterior to resemble the National architectural style. Removal of the aluminum siding from the 1970s revealed the original clapboard siding from the 1900 conversion to a house. Throughout the restoration, evidence of the construction method and materials of the original barn structure were discovered under the siding. 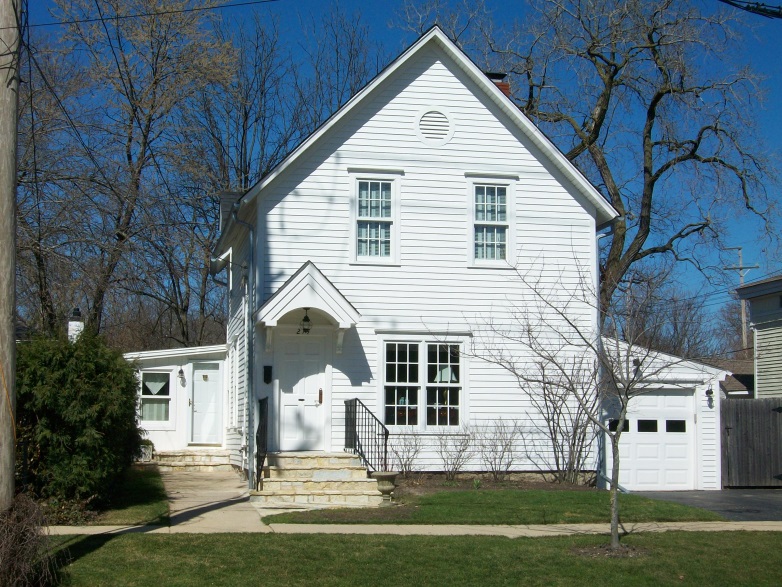