Update: Woman in Wheelchair Killed in Hit and Run Crash

St. Charles police detectives continued to investigate this matter through the weekend. A suspect and vehicle were taken in to police custody late Friday evening. This afternoon, charges were authorized by the Kane County State’s Attorney’s Office.

Jensen has been charged with:

The victim in this case has been identified as:

Jensen will remain in custody pending a bond hearing to be held on October 12, 2020.

St. Charles Police Department would like to thank the Kane County Accident Reconstruction Team for their assistance in this investigation.  We would also like the thank the news media and members of our community for helping to provide information leading to this arrest.

The charges against Jensen are not proof of guilt. Jensen is presumed innocent and is entitled to a fair trial in which it is the state’s burden to prove guilt beyond a reasonable doubt.

St. Charles Police and Fire units responded at 4:04 p.m. to the report of a crash involving a pedestrian at 3rd St. & W. Main St. (Rt. 64). Upon arrival a woman was found unconscious in the roadway. Initial witness statements indicate that the woman who was in a wheelchair was crossing N. 3rd St. with her adult son. They were crossing in the crosswalk when a pickup truck waiting at the light began making a right turn from southbound 3rd St. to westbound Main Street. The pickup struck the woman in the crosswalk. The pickup continued westbound on Main Street without stopping.

The woman, 88 years-of-age of Chicago and whose name is not being released at this time, was transported to Northwestern Medicine Delnor Hospital where she was pronounced deceased.

St. Charles Police Department officers and detectives are actively investigating this crash. Investigators are looking for a 2016 Dodge Ram, Cummins Edition, 4-door pick-up truck, driven by a male/white subject wearing a black t-shirt. The Dodge Ram pickup has chrome outside mirrors, chrome door handles and spoked chrome rims. A picture of the truck in question is below.

Information can also be left on our anonymous tip line at 866.378.4267 or at www.stcharlesil.gov/report-crimedrug-tip. 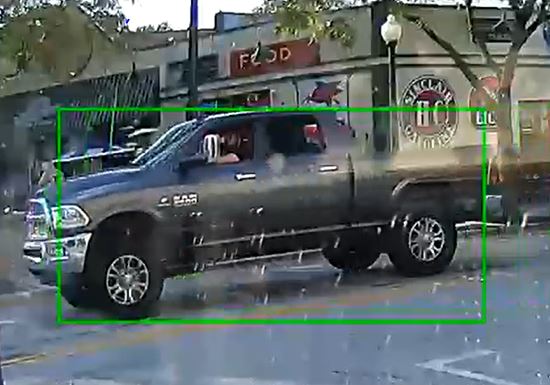