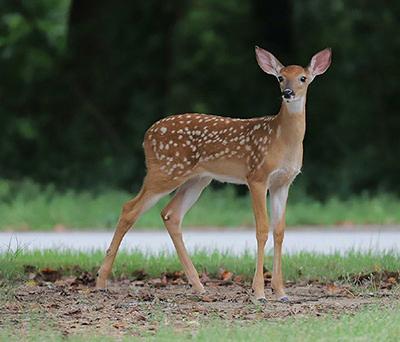 The City of St. Charles has developed some tips to help residents mitigate the presence of the white-tailed deer in residential neighborhoods. Human safety is the top priority of the City, and this plan includes information from experts from the Illinois Department of Natural Resources.

The white-tailed deer is the state mammal of Illinois. Thriving in both north and south America, these beautiful creatures feed on legumes and forage for other plants, including shoots, leaves, and grasses.

Early in the 20th century, deer were nearly hunted to extinction., with experts estimated the whitetail deer population at around 300,000. However, successful conservation efforts have allowed the deer population to flourish, with biologists estimating deer populations stabilizing around 30 million.

Due to these high deer populations, interactions with humans are more frequent. Encounters with deer may increase from October to January during their mating season. Be extra careful when driving during those months as deer-vehicle accidents are more likely. Deer are most active at dusk and dawn, so it is not surprising that most accidents involving deer happen between the hours of 5 to 10 p.m. and 5 to 8 a.m. While all deer-vehicle collisions cannot be prevented, there are steps that drivers can take to avoid an accident.

If you have noticed deer nibbling plants in your yard, consider replacing shrubbery and plantings with deer resistant varieties. You may also want to install covers over window wells to prevent animals from falling into the openings. And be aware that hunting is not allowed within City limits according to Ordinance 9.60.030, and firearms and/or traps are not permitted on Park District property or City property.

Despite its gentle nature and beauty, experts recommend never approaching or feeding deer. Deer are unlikely to attack humans, but male bucks have been known to become aggressive during the mating season, due to elevated levels of testosterone. Deer carry ticks and Lyme disease in their fur, so never pet or touch them.

The following tips come from “20 Ways to Keep Deer Out of Your Yard” by Danielle Blundell on This Old House Online.