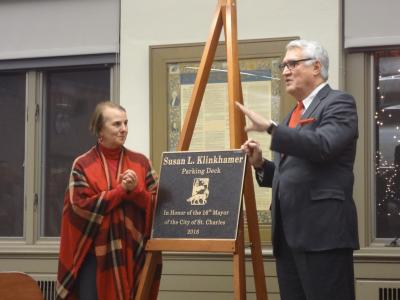 “The genesis of the First Street development originated during Mayor Sue Klinkhamer’s administration,” said Mayor Ray Rogina. “During her tenure and leadership, with support from the City Council and from a variety of St. Charles citizens, the foundation for creating a vibrant and strong pedestrian-friendly downtown environment was established. What we see today over a decade later is a result of the execution of that original vision and effort.”

The public Parking Garage, which is on the north east corner of 1st & Illinois streets, has 110 spaces, is part of Phase 3 of the 1st Street Development Project.