The City spreads salt & brine during ice storms, freezing rain, sleet or when 2” or less of snow has fallen. Existing weather conditions and the forecast are used to determine the level of salting & brining needed. There are three levels or priority classifications:

Plowing usually begins when 1.5” of snow has fallen and 2” or more has been forecast. The implementation of one of several plowing scenarios is determined by the amount of snow forecast and the duration of the storm.

Plowing generally begins with main snow routes and the downtown area. Routes are selected depending on the time of day, the amount of snow falling and the forecast for the day. As snow accumulates to 2” or more, secondary roads are plowed to ensure the movement of traffic through neighborhoods and subdivisions.

Full plowing operations consist of plowing all streets, cul-de-sacs, alleys and City parking lots. The goal is to have all areas plowed by the morning rush hour the day following the snowstorm. After an extremely heavy snow (12” or more), or back-to-back storms, City crews start by removing snow from intersections. 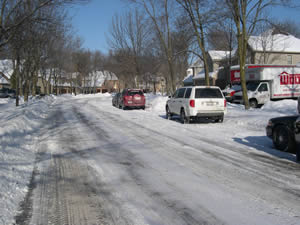 The Snow Route Parking Ban is put into effect by the Police Department upon notification by the Public Works Division Manager that 2” of snow has accumulated and additional snowfall is predicted. Snow routes (detailed in Section 10.40.060 of the St. Charles Municipal Code) are marked with blue signs. The Police Department will begin enforcing these parking regulations approximate one hour after the 2” accumulation has been reached.

A citywide parking ban may be put into effect with 3” or more of snow has accumulated and full plowing operations are underway. Cars may be towed to a cleared street or designated parking lot. The Police Department will begin enforcing these parking regulations approximately one hour after the 3” accumulation is reached.

Cars normally parked on streets overnight should be closely monitored and removed before plows need to get through. Many snow incidents occur at night, so residents are asked to keep informed on weather forecasts and cooperate accordingly. Parking on the parkway (behind the curb, gutter or road edge and the sidewalk or property line) is authorized during a snowstorm only when no other off-street parking is available. When the snow stops and plows have removed snow to the curb, vehicles must be placed back on the street.